When my love Linda died in 1999, due to the effects of cervical cancer, shots against this didn’t exist. When in 2005 those shots became available, I wondered if this would have prevented Linda’s illness. I’ve done some research on this topic, read books, spoke to people, did online research and last but not least I’ve given it a lot of thought, and still do…

Below I have mentioned resources on which I base my present day vision regarding vaccinations (HPV being just one of them). I have added links pro and contra vaccinations. Alas some of them are in Dutch language only.

1. My own vaccinations during my youth (60’s), military service (around 1979) and preparation for a trip to Indonesia (1984).
2. My education on school, such as biology lessons during my education as a teacher.
3. What I’ve learned from Linda, as she was a high school health teacher for 25 years, educating 13-18 year girls in Child Care and Education.
4. The official Dutch Healthcare website, RIVM: here is the link.
5. The book Cervical Cancer (HPV-vaccins als een ‘deus ex vagina’) by the wellknown science journalist Désirée Röver. We know her personally. Here is the link.
6. Various skeptic websites providing information against what the owners regard as quack practices. Here is a starter website.
7. Ex-GP Frits Blom, who got a burn-out and developed a critical view on the health care system. We know him personally. Currently he has no website anymore.
8. A very educating book about the inviolability of the human blood: Vaccination is not immunization, by Tim O’Shea. Here’s is a link to his website.
9. A plea to make vaccination mandatory, by Roland Pierik: Mandatory Vaccinatiion: an Unqualifeid Defense. This is his website.
10. The boek Chemo, of kan ik zelf kiezen? (Chemo, or may I make my own decision?) by drs. Henk Trentelman, who had cancer himself, and lived much longer than expected by the oncologist after he decided to go his own way. His book is written in Dutch, but here’s an english link referring to his story.
11. The book Censored Health by dr. Gábor Lenkei. Here’s a link.
12. The Hopewood Children, who were raised (from 1942-1970) without vaccinations and modern medication, eating organic food. They appeared much healthier than kids from the same age. Here’s a link.
13. This book, Nutrition and Physical Degenaration by dentist Weston A. Price, was an eye-opener that I had been searching for my entire life, because as a young boy I didn’t understand why I had tooth decay. After all God created us and regarding our teeth it seemed he did a lousy job. Weston Price was a dentist and he did scientific research all over the world, checking and comparing the teeth of the many indigenous tribes with member still living and eating traditionally and others who had adopted modern western food. His study is about 100 years old, but his findings are most important to understand the importance of our food. It indicates the relation between food and health in terms of bone-structure, tooth decay, tuberculosis a.o. As a result he discovered certain vitamines most important to support our health. According to me this is the one book every dentist and every General Practitioner should know inside out. Here’s a link to the Weston Price Foundation.
14. Hundreds of video’s by parents of children who developed autism shortly after being given shots. This started after a US reporter agitatedly said that vaccinations do not cause autism: “Hear this well: vaccinations do not cause autism!”. Her statement made many parents in the USA with autistic children very angry as they have to deal with the reality of autism. They know exactly when the problems started for their up to that moment totally normal and playful kids. Here’s the website: Hear This Well. (youtube) You can watch a compiliation of some recordings below…

15. A Danish TV documentary based on serious research on girls who were vaccinated against cervical cancer and are seriously ill ever since. Here’s is a link.
16. Anneke Bleeker, well-known in the Netherlands under the alias ‘Disturbed Mother’, who couldn’t keep silent when she did her own research and discovered facts about vaccinations and then started to share her findings with other people. We know her personally. She a very motivated woman! Here is a link (Dutch language).
17. IMPF-report, a professional documentary made by crowd funding in Germany, shows many people speaking about a fundamental problem the world is facing right now regarding vaccinations. Here’s is a link.
18. Dr. Matthias Rath, a German heart-specialist who discovered that Vitamin C plays a key role to keep your hearth and blood vessels in good condition. Many heart problem could well be avoided if people would get enough (way much more than officially adviced) vitamin C daily. Here is a link.
19. Ellen Vader, a kind and motivated woman living in France, speaking Dutch, spreading a newsletter with well documented critical information. We know her personally. Nice woman! Here’s link to one of her articles about HPV for young girls. (Dutch language)
20. Spiegelbeeld (Mirror Image), a Dutch magazine that has grown into an awareness magazine, with a fresh critical perspective on many topics, including vacciantions. We have placed many ads in this magazine and even had a few articles about the Akaija. Here’s a link.
21. Raum & Zeit (Space and Time) magazine in Germany, well documented, triggers your attention and makes you think again about what officially is claimed to be the truth. We have had several articles in this magazine about the Akaija. Here is a link.
22. Institut-Infomed in Münich, Germany invites representatives of indeginous tribes from all over the world to share their insights about nature medicine and tradtions. We work together with them, because we know some of those representatives. In 2016 we invite mr. Akay Kine from Altay (Russia) to come and speak for the Altay indeginous nation to speak and share their ancient knowledge regarding White Faith (Ak Djang). Here’s a link.
23. The Dutch magazine ‘Frontier Science’ about popular topics with a fresh view on world politics, health and alternative science. We have advertised often in this magazine and also had an article in it. Her is a link.
24. Biophoton-therapists like my love Marianne have learned to neutralize the side-effects of vaccinations during the first check-up. The reason is that vaccines appear to mess up clear reading during the measuring phase. This therapy is related to electro-acupunctue. This may(!) be caused by the poisonous ingredients that are part of any vaccine: mercury, formaldehyde, aluminium, animal protein, etc. So before proceeding with treatment such toxins need to be neutralized first.
25. Forbidden Knowledge (here’s the link) by Alexandra Bruce shares important up-to-date information about deep-state, secret government, hidden agenda’s, black ops, NWO, Skulls & Bones and all such disturbing information that will probably make you very angry. Of course the vaccine-agenda is part of this. You can register for her daily newsletters for free.
26. Earth-Matters… idem, a great source of alternative news. You can freely register to their newsletter.
27. The chain of events on 9/11 seem to have nothing to do with vaccine-programs, but when dig into the matter, you will discover that there’s a relation.
Metal scientist dr. Judy Wood has studied all available data like Sherlock Holmes and present her findings in her book Where did the towers go? This question is the only one that really matters… because the identical dustification of 2 of world’s tallest sky scrapers is simply impossible with the commonly know technology. The big problem is that the truth that comes forward is so hard to accept, that people indeed don’t want to accept this. Accepting that you did something wrong is often easier that to accept that someone else did you wrong and that you didn’t see it coming.

I suggest you watch this video of her presentation in the Netherlands for a couple of minutes with an open mind. 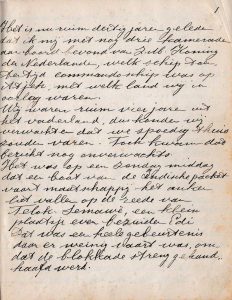 28. The diary of my grandfather Jacobus Roskam. Alas he died before I was born in 1960. He was a sailor in the Royal Dutch Marine, and believe it or not… he was on the last true sailing ships of the marine. Part of his text is dedicated to his life on Dutch nave ships who participated on the sea blockade near the coast of Atjeh (Sumatra), because of trading interests of Holland. After extensive shootings on the coast of Atjeh he was sent out the next morning to check out the effects of the shootings. He then found countless bodies in the trenches, many of which were women and children from Atjeh. He’s so shocked by what he has seen that in his report, that he wrote 30 years afterwards, he doubts his decision years ago when he joined the Dutch Marine.

This text, allthough written in old-Dutch is a very beautiful report of life on a navy sailing ship, written by my own grandfather! But it also describes a black day in Dutch history, raising questions about the reason whe ‘we’ were in Atjeh. I will use this text in my next book ‘Finding Nasja’, which is about finding yourself or in fact your Self: the Divine Being that We are. In time I will translate this text and put it online, as I think this is an important text for the history records of present day Aceh (Atjeh).