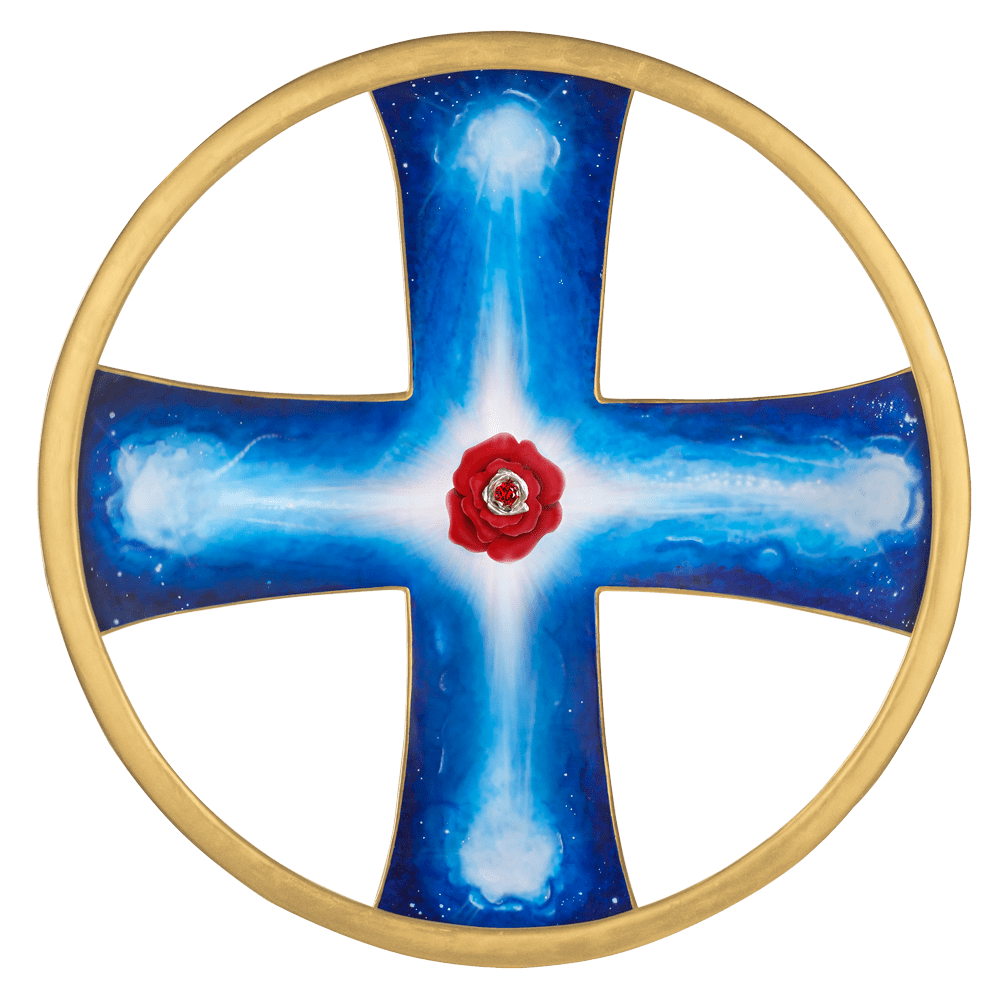 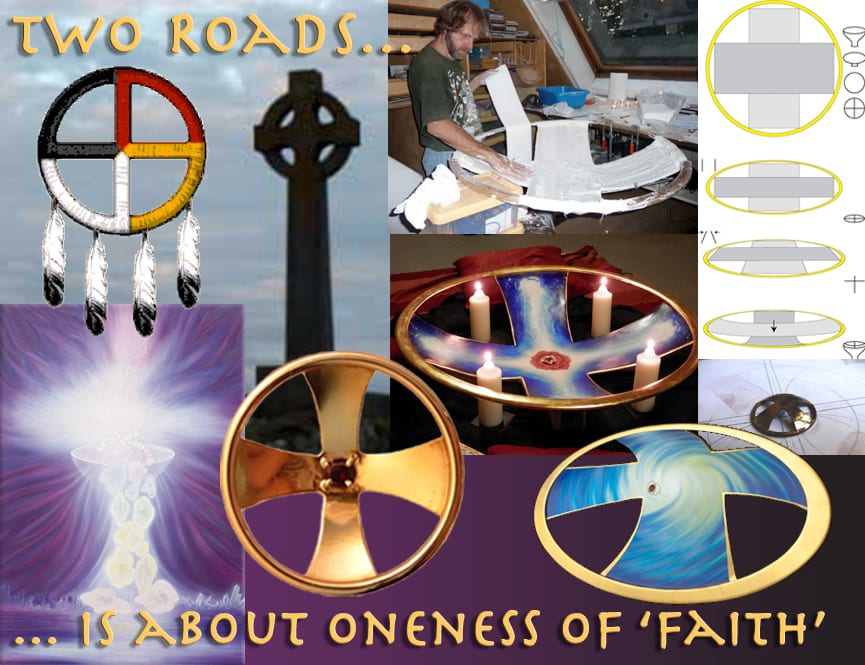 This page tells the backgrounds of a special symbol called Two Roads, a unique symbol unifying religions, going to the roots of any religion. What’s it about? What’s in the Heart of a religion? What’s in your Heart? Where do we search for? While you read it Eliza’s book The Two Roads, you are being prepared to understand the vision her guardian angel Nicolas Black Elk had during his lifetime on Earth.

Nicolas Black Elk Nicholas Black Elk (Dec 1863 – Aug 1950) was a famous Wichasha Wakan (Medicine Man or Holy Man) and Heyoka of the Oglala Lakota (Sioux).  At the age of 9, during a coma that lasted several days, he had his vision. When he told the people around what he had experienced they understood that he was a clair-voyant.

At around the age of 12 he was present at one well-remembered, but awful day in history: the Battle of Little Big Horn 1876. Several years later he was present at yet another dark day in the history of mankind: the Wounded Knee Massacre, during which he got injured. During his life he has helped many people by the powers the Spirits gave him.

With thanks to World Wide Wisdom (www.worldwisdom.com) for use of the photograph. Now let me introduce another famous Indian: Chief Seattle.
Chief Seattle was a prominent figure among his people. He pursued a path of accommodation to white settlers. The city of Seattle, in the state Washington, is now named after him.
Seattle lived from approx. 1780 till 1866 and he has seen how the white men overrun the Indian lands. It was also the time of the Goldrush, and the lands of the Indians were largely taken by the white men. There was no stopping to this process. In (probably) 1854 Chief Seattle held a speech, addressed to the big white chief in Washington. This speech is now a widely publicized speech arguing in favor of ecological responsibility and respect of native Americans’ land rights. It has become very popular and is quoted countless times. because it’s so beautiful!! Here you can read the full speech. But in this context a few lines of his speech are very important:

“Your God is not our God! Your God loves your people and hates mine.(…) He has forsaken His Red Children, if they really are His. Our God, the Great Spirit, seems also to have forsaken us. (…) No; we are two distinct races with separate origins and separate destinies. There is little in common between us. (…)

A few more moons, a few more winters, and not one of the descendants of the mighty hosts that once moved over this broad land or lived in happy homes, protected by the Great Spirit, will remain to mourn over the graves of a people once more powerful and hopeful than yours. But why should I mourn at the untimely fate of my people? Tribe follows tribe, and nation follows nation, like the waves of the sea. It is the order of nature, and regret is useless. Your time of decay may be distant, but it will surely come, for even the White Man whose God walked and talked with him as friend to friend, cannot be exempt from the common destiny.
So we may be brothers after all. We will see.”

There is one thing Nicolas Black Elk is well remembered by. On one of his journeys that brought him to France and England he encountered the Christian belief. He discovered that there was not much difference between the White Man’s God and the Indian’s Great Spirit. And he became the Indian holy man who became a Christian. He became Christian in 1904, aged forty. Not every Indian was happy about this, but he said: “my children have to live in this world.”
In fact he never really abandoned the Indian way. It seems he embraced the Great Spirit and the White Men’s God, being the same.

So now you see… paths merging. Is the Christian Belief the better one? Is the Indian way the better one? Or is it Allah then? Or should we become Buddhists?
Imagine this: picture yourself being born in another civilisation on another planet, let’s say the 4th planet of Sirius B…
Just making a bit fun here… or not?
Because… what religion, if any, would be yours then?

So let us not argue about this. This website is not about religion, but about Oneness, about Love, aobut what’s in the Heart of any religion.

(…) “It shall stand in a nation’s circle,” said the Grandfather, “a cane to walk with and a people’s heart; and by your powers you shall make it blossom.”
Then when he had been still a little while to hear the birds sing, he spoke again: “Behold the earth!”
So I looked down and saw it lying yonder like a hoop of peoples, and in the center bloomed the holy stick that was a tree, and where it stood there crossed two roads, a red one and a black. “From where the giant live (the north) to where you always face (the south) the red road goes, the road of good,” the Grandfather said, “and on it shall your nation walk. The black road goes from where the thunder beings live (the west) to where the sun continually shines (the east), a fearful road, a road of troubles and of war. On this also you shall walk, and from it you shall have the power to destroy a people’s foes. In four ascents you shall walk the earth with power.” (…)

When Eliza told us about the Two Roads vision we didn’t tell her straight away about ‘Faith’, the object/painting that I had made several years ago, in 2004 or 2005 I think it was.

Below you see the Two Roads symbol from the front like I made from an old  Austrian golden coin that was given to me by Jan Frank, as a gift from the Kogi Indians in return for the gold that we donated for his project Gold for the Kogi. In the centre there’s the Red Stone of Power. Vertically you see the good red road of Spirit. Horizontally you see the dark and fearful road. Where the two roads meet there’s a holy place. The dark road is the road on Earth, the one you have to walk, but also the one that will challenge you. It leads to nowhere, but in order to move forward on the road of Spirit, you need to walk the dark and fearful road as well.
By always returning to the centre, you have an overview. This is the holy place, the place of the Red Stone of Power. It’s the place of the Heart.

Now take a look at what happens when you horizontally rotate the symbol? By the way… should you be interested in buying a silver or golden Two Roads symbol. This is the link to our webshop page.

Now look at Faith again… also in the centre there’s the Red Stone of Power.

Now let us look at a few other symbols in history. 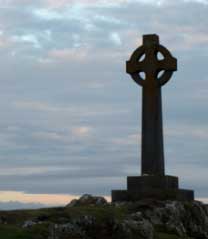 Here’s a so-called Koptic Cross. The Kopts are believed to be the very first Christians. They are connected to the Essens and the Druids, who are part of the Celtic or Gaelic culture. it is a Celtic Cross at the same time.

In September 2013 Wim finally finished the big version of the Two Roads for Eliza. He started working on it about one year earlier, but of course work was done at intervals. This big Two Roads has a diameter of approx. 1 meter.
Eliza was very, very enthusiastic about this. She immediately could see what had been painted, and why this was done. We don’t remember all that she said, but one of the most important things is that the 4 balls of light in the four directions are in fact the Four Pillars of Light, one of which being Nicolas Black Elk. You can consider this like archetypes. In other cultures the names for these pillars of light may be different, but it’s about the same unique aspect of soul-energy.

Visit Eliza’s website for more information about her project Two Roads and the prayer ceremonies.

The big Two Roads will be used for meditation and especially for prayer ceremonies, to send healing to all those in need. Should you happen to know someone for whom you would like healing energy to be sent to… don’t hesitate and send us (or Eliza) an email with the name. More writing is okay, but isn’t necessary. The intention is what is comes down to.

The Making of Two Roads When we were in Russia in 2014, we visited a big cathedral near the Kremlin, the Cathedral of Jesus Christ the Savior. What took us completely by surprise are the hundreds of Two Roads symbols that can be found in this cathedral. Everywhere you look you’ll find them. Interesting is the history of this cathedral, as Stalin destroyed it in 1931, as part of his plan to rip out the Russian heart. Russians are very religious. They have suffered a lot during the ages, because of countless dictators, regimes, wars, the harsh climate and vast stretches of land. What we, in the Western world speak about in religious terms… they live it. So when Stalin destroyed this magnificent church, it was a very dark day. On the website of the cathedral you can read:

“The first explosions rocked the Cathedral at noon on December 5, 1931, as per the decision of Stalin’s politburo. The memorial to military glory and the most important church in Russia was brutally vandalized and destroyed.
During those horrible days it seemed as if the Lamp of Faith, that had burned in the cathedral through the efforts and prayers of the cream of the nation was extinguished forever.”

What strikes me is that December 5, is the day my love Linda died, shortly after us having agreed that she would inspire me, if possible.

But Stalin didn’t succeed. He destroyed the cathedral alright. But the Russian heart was not destroyed, not at all.

In fact, the cathedral was rebuilt as soon as Corbatsjov’s Glasnost paved the way. It’s an exact copy of the original cathedral and it’s well worth a visit whenever you go to Moscow.