Background information by the book Lady of the Rings, that tells the story of the coming into existence of the Akaija through Linda’s difficult road on Earth. This page shares a few pictures and sound fragments that are most important for illustrating what happened during the time she was terminally ill.

Linda told me that everyone has a place somewhere in the Cosmos, entirely yours, where no one will disturb you unless you allow them, where you can be totally you, feeling safe and where you can receive healing. Linda’s place during here illness was an ancient stone circle. We discovered this during visualizations. She then would lay on her back between the stones on the seventh flat and inscripted stone and from the Plejades a beam of rainbow colored light came down to heal her inside her belly. What regular pain-killers often failed to do, was easing her pain, but here she could fall asleep… finally. This circle was located on a beach, halfway in sea during high tide.

It was here that a cheerful woman from Spirit, called Amà, came to visit her. She appeared to be a very good friend from a previous incarnation. Amà and her little dog Taksi lifted Linda’s (and my) moods and for hours afterwards I couldn’t ignore feeling much better than before. 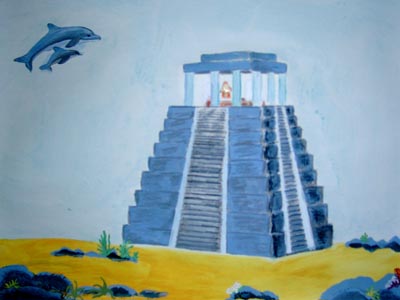 While laying between the stones Linda, guided by me, also was visited by a very large bird, possibly an eagle, with a very friendly ‘face’. This bird allowed her to sit on its back and together they flew over oceans and through time. This is how they discovered Atlantis beneath the waves. The found a a big Maya-like pyramid on the bottom of the ocean. There she could lay down and she received healing from an Atlantean priest in an orange robe, using a big Ankh.

Linda talks in an strange tongue

When Linda sometimes was kind of ‘taken over’ by a strange voice calling himself Igor, this raised questions in me. But after a couple of days we discoverd that Igor was no evil entity at all. He was part of her, somehow.

Below you can listen to a few recordings of Linda, while speaking with Igor’s voice, even in his ancient language. But please beware…

To the many people who knew Linda (family, friends, colleagues, students) listening to her voice, especially in these circumstances, this can be very confronting to suddenly hear her speak again like this. So please keep in mind that Linda is safe and sound now. She’s well beyond this time frame now. And when you do listen, don’t forget the last fragment that brings you her normal cheerful and laughing voice, so you can remember her like she was and still is one way or another :-).

Recording 1: Igor is talking very busy, maybe even frantically in unrecognizable speech. He/she did this for many days, hardly pausing.

This fragment is pretty fiercely, as you can hear the pain in her voice. It was necessary though, very important even, because this is related to the fundamental reason of her illness, as you can read in the book Lady of the Rings.

Recording 3: Igor’s speech now has become a recognizable language, maybe even an existing one

I tried to write down phonetically what was said:

The letter that Linda received from a psychic woman

This woman said she could access the Akashic chronicles, kind of an all-time history recording of everything that has happened, every move, thought and action. Reading this note made Linda call me immediately saying: “It’s him! It’s him! Finally… you see… I didn’t make this up. It’s him!”

And when I read it, I started crying for the first time in 40 years or so. And immediatelly I knew: I was part of this somehow.

The first, and most important paragraph reads: “A previous incarnation: 1534. Russia. You were a soldier and fought with swords and axes. You were hit many times, especcilly in the lower body and legs. Your intestins got out and no one could help you anymore. So they left you. There was a lot of pain and sorrow, but also anger. This I cleared. It took 5 days before you died.”