How did the Suzy-ama come to be? 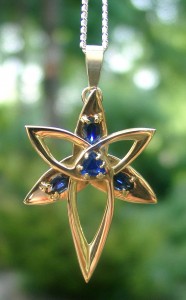 Just like the Akaija this piece of jewellery came tob e because of inspiration from Wim’s passed love Linda. And there’s a story behind it…

In 2003 Wim and his new love Marianne regularly went to Belgium to treat people at home, because Marianne is a therapist. Some of these people were very ill, and Suzy was one of them. She suffered from bone cancer for almost 8 years and had lots of pain. She and her husband Eric did all they could to fight against this, but nothing could really stop her cancer.

We they came at their place for the first time, it was for Wim as if he had stepped back in time, remembering Linda’s pain and their desperate struggle to fight the pain and sleeplessness. And Marianne, who had treated Linda, felt the same. Suzy was so tired of fighting and so ill that Marianne’s treatments focussed on enlightening her situation. During the endless conversations with Suzy and Eric soon a special friendship arose and they felt understood by them as they had gone through the same situation.

They all knew that Suzy was not going to live much longer and especially for Eric this was a hard fact to accept. Suzy realized this all too well and a few weeks before she died she asked Wim, knowing Linda would inspire him, to design her a special piece of jewellery that would remind Eric of their everlasting love. There wasn’t time for Wim to make it, but he was able to show her the draft concept, and the stones, which already had arrived. A few months after her passing, the piece was finished. It was made from 18 carat gold with a 1 trillion with 3 surrounding marquise sapphires it. It design is a little bit inspired by Evenstar of the Lord of the Rings, as well as by the Triskal or Celtic Knot, with the number 3 playing an important role. Suzy and Eric had one daughter.

When afterwards Wim and Marianne showed photographs to other people, they asked if it was for sale. Well, not really. But the question kept coming, so Wim asked Eric if he would agree to make a copy and to reproduce it. He agreed, happy that more people would remember Suzy this way. So Wim made a new master to be used for casting.

The working of the Suzy-ama 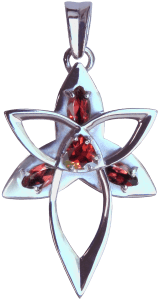 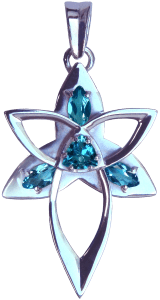 The Suzy-ama, just like the Akaija, is a message from the Spirit. Central is the message: “You are loved”. The energy of the Suzy-ama is the power of Love. This amulet is heart warming and beautiful at the same time. It also raises the frequency of the wearer and because of this one feels more connected to other people and to the divine Spirit World. She influences the meridians and the blood circulation. She give comfort and warmth. Marianne says her Suzy-ama (with blue topaz) gives her the feeling that she’s surrounded by angel wings.

The name Suzy-ama is of course connected to Suzy, and ‘ama’ is derived from the Latin word ‘amare’, meaning ‘to love’. So the name means: you’re loved.

Our friend and medium Yvonne received the following words: