Marianne Agterdenbos was born on October 8th, 1951. She is, together with Wim Roskam, the driving force behind Akaija & Art. She’s a therapist Biophoton Therapy (Biontology) and NAET practitioner.

Marianne studied sports physics and expected to become a sports teacher. Well, she became one, but the cosmos had different plans with her. So after being a teacher for a few years, one night she was driving home on her moped, suddenly had to brake and  at that moment both steel wired cables. broke. So she crashed into a car. A bus managed to avoid her by inches and ‘accidently’ she landed on the doorstep of a physician.

She survived it all miraculously without braking anything, but both her postal wrappers were torn. In that time (the seventies) chances of completely recovery weren’t good and the result was that she couldn’t do the teaching again. End of career? 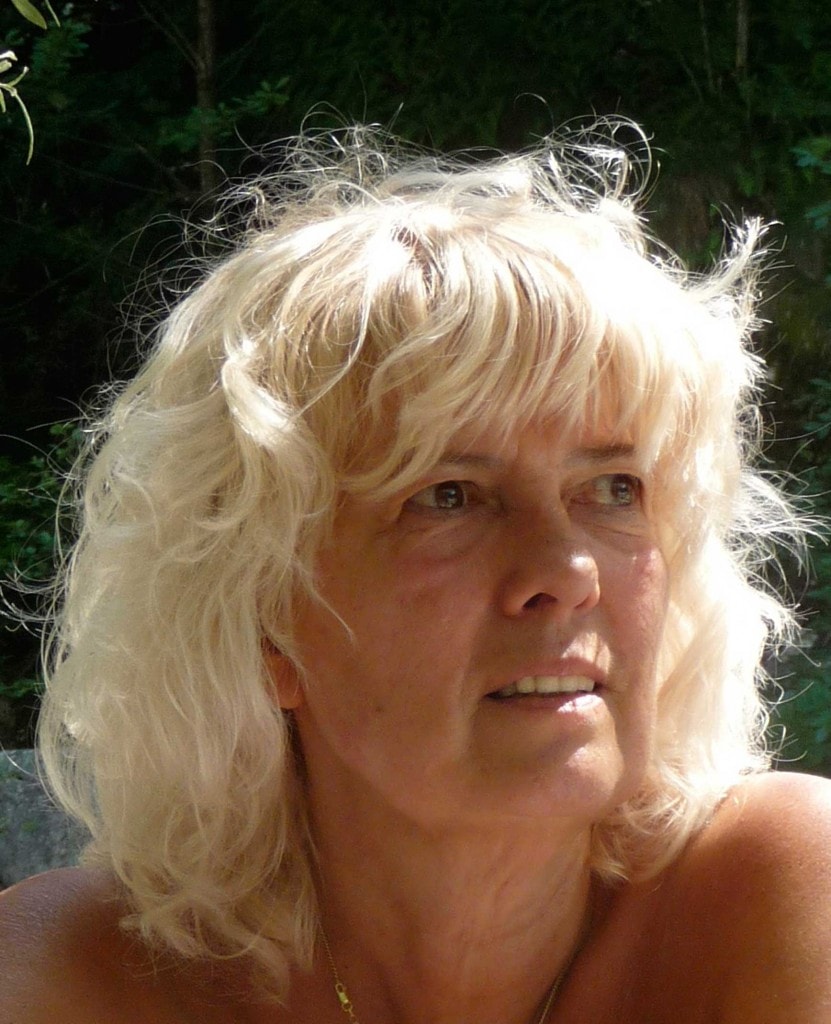 Or not the end of career?

She married and got three children: Femke, Peter and Lianne. As to be expected she had her hands full with them. In the nineties she had a difficult time in her life, which a.o. showed itself in a serious type of Candida, against which no remedy was effective. She tried alternative routes to get out of this misery and became a Reiki master, took courses in geomanty and started singing under the shower. No songs, but sounds and sentences that ‘came by itself’. She let this happen and sometimes it was as if she was the Siberian or Indian sjaman, scaring away negative spirits. And who shall say… maybe that’s exactly what she did: cleaning her self.

Her candida situation forced her to be consciously aware of her eating pattern, so she studied regenerative nutrition. In the year 2000 she decided to use her savings for a new type of treatment device called ‘Health Angel’ for a therapy named ‘biophoton therapy’. Learning to work with this was quite a challenge, but she mastered it and later bought a successor of the device called ‘StarLight’.

One day in Autumn 2001 she was called by a very experienced therapist working  with the same device she now had, Hans Hoogeveen in Putten, Netherlands. He said that moments before he had been called by Wim, whose wife was serieus ill. He had no time to treat her, so his question to her was if she was willing to treat Linda. And as if it had been planned this way… she only lived a few hundred yards away!

That was unexpected! And quite a shock. Hardly able to work with her new device, though thoroughly educated and trained as a gymnastics teacher in the field of body physic, this would be a bold step to treat a woman with a serious type of cancer. What do I get myself into? What responsibilities do I take on my shoulder? Am I in conflict with the law? I just started! How do I…???

But Wim and Linda had decided to go a specific way, totally disregarding the hospital, and Hans assured her that he would support her, advise her and if necessary provide extra medications. With this backup Marianne decided to accept his offer.

Marianne‘s loving, unconditional attitude opened doors that had been kept shut for  many doctors, specialists and therapists: she got Linda’s confidence. If there was one thing that Linda and Wim had learned, then it was that unconditional Love for everything is the real source of healing. Marianne had this abundantly.

She now works as a selfsupporting therepist in a Centre for Complementair Healing in Apeldoorn. Her specialism is Biophoton Therapy and NAET, an effective Allergy Elimination Technique.

Marianne and Wim now live together (with loving approval from Linda) for many years.

The logo for her practise was made by Wim (without knowing her background at the time) and symbolises ‘Marisun‘. It was the very first painting he made after Linda’s transition.

The rainbow energy-spiral symbolises the light frequencies being used in biophoton therapy. The star constellation is Aquila (Eagle). The feathers of the eagle hold the power of the Great Spirit, the connection to the Divine.

And that’s how she feels… like an old sjaman in a new era, with modern equipment, but with the same goal as the medicin man… enlightning the suffering of people, to help them find the way to healing. Not by mainly look at the body, but to the whole: body, mind and spirit. What caused the problem in the first place? What deeper reason is hidden beneath?

The strange sjamanistic singing that she started in the nineties, now has developed into more than self-healing. When she now has patients, open-minded for this, and she feels it’s okay, then she sometimes uses this as part of her treatment. It’s effectiveness can afterwards immediately be confirmed by the measurements on the biophoton-therapy-device.

During a regreesion in workshop-weekend with Jonette Crowley (author of ‘The Eagle and the Condor’) it was made clear to her from where this singing originated. She made contact with a group of ancient beings, from all cultures of the planet Earth, calling themselves the Soul-Singers of Nature. They told her, that she was one of them, but a Soul-Singer for people.