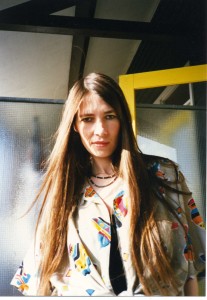 Linda de Redelijkheid was born in 1954. Interesting is that Linda and I (Wim) came to live really close to each other during the 60s, distanced only 300 yards or so, living in Apeldoorn. I even have a vivid memory of her, sitting as a todler in the back seat of my mother’s bicycle, driving past her house in, where she was playing in front of her mother. Something ‘hit’ me then and I had plans to escape from home to ring her bell :-). That song (by Anita Ward) would later be one of her favourites.

In 1966 she moved to another county in the Netherlands, but in the 80s, she moved back to Apeldoorn, to start working as a teacher on a girl’s school, called Sprengenborgh. Before that she had lived in Tel Aviv, Israel, working in a kibbutz.

Her passion was dancing. She would have become a ballet dancer, if it weren’t for a tiny problem in her back. Show Musical Academy, if it would have existed then, would have been excellent.

But… ballet dancer or not… together with me we tried out practically every existing dance style: Latin, Rock ‘n Roll, Streetdance, Lambada, HipHop, Breakdance, Riverdance, African Tribal dances, Folk dancing, Salsa, Merengue and last but not least: Argentine Tango. This one appeared to be the most challenging and difficult to master, because the moves are improvised during the dance and as a man you need to know exactly about your partner position and posture. And the partner must be willing to be lead, which was pretty difficult for Linda :-). In fact partners take lead in turns, breaking in at times. This dance, more than any other, simulates life and connectedness between the partners.

As a teacher she was responsible for two types of classes: Arts & Crafts and Child Care & Education. She did it so well, that one year she was granted the ‘Teacher of the Year” award, which was organized by the students. On a school with about 150 teachers that means something.

Linda was my (Wim’s) love, but she died in 2001 due to cervical cancer. Shortly before she asked me a special question: What can I do to let you know I will be there still?

My answer was a question: Would you like to inspire me, if possible?

This is how the Akaija project started. She’s the one who started it all, a tiny object that’s now used by tens of thousands people worldwide, as well as by animals and now big Akaijas are even used for environmental harmonization.

This story about how it all started was published in the Netherlands and has already been translated, though not yet published in hardcopy. But… you can download and read it here as a PDF: The Lady of the Rings (Opting for Freedom of Choice).