This page shares information about the painting ‘Aura Healer’, made by Wim Roskam, on which the unique Akaija design came into existence, which is now used by more than 15,000 people worldwide. 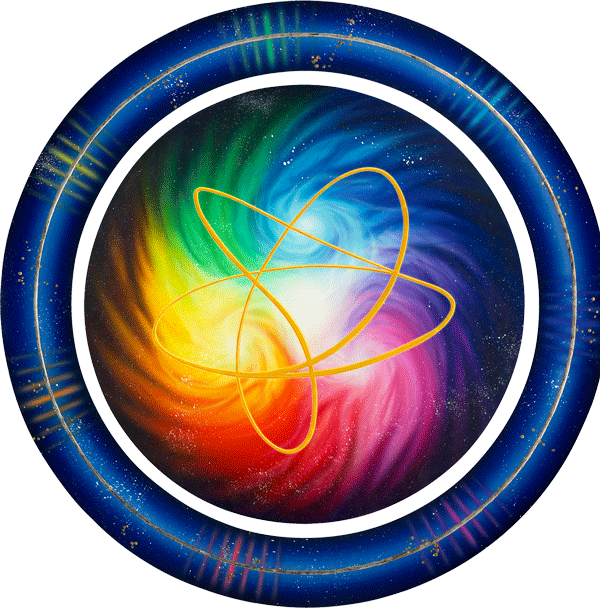 Shortly before my love Linda died from cervical cancer in 2001, she asked me what she could do for me to let me know she would be ‘here’. And I asked her to inspire me, if possible.

In 2002 I made a couple of paintings in a very short time, Aurahealer being one of them. But I didn’t know it to be a healing tool for the aura until a psychic told me so in a brief remark ‘that is an aurahealer!’.
She explained it then and said that people sometimes lack certain colours in their aura, making them feel uncomfortable, or even ill.

Free animals in nature know what to do in such a case and go to a place were these colours are present in the form of energies. They might sit on a certain spot for a while, charging themselves, and then go somewhere else. They ‘know’.
The rational thinking of humans has overwinged the intuitive gut-instinct from the heart and we might stay in locations in situations far longer than is healthy for us, because our ratio tell us to so where our heart tells us ‘enough is enough’.

‘Aurahealer’ gives you the chance to add missing colour-energies to your aura or energy field. The outer ring of the painting can be rotated separately from the central painting. This changes the energy output of this painting.

What you do is rotate the outer ring until you feel that’s the right position (don’t worry, don’t think!), and put the painting somewhere on a wall or on a flat surface. Every now and then when you walk by you take a short look at the painting and you will be charged with the right energy. And when you feel the ring should be rotated… just do so.

On the computer screen this rotating option is not possible yet, but I hope to realise some kind of flash rotating option so that you can download Aurahealer to be used on your desktop.

In the painting several other cosmic aspects are painted: the triskal can be seen in the central hotspots of colours. In the outer ring you can see the star constellations of the zodiac, and the colours of the rainbow.

On Aurahealer I wanted a symbol that would show how a left rotating spiral can be made to rotate to the right. But how…?

Following the blue spiral going inwards and then changing colour to red while going outwards the direction of rotation keeps the clockwise direction. Nothing happened except the energy went to and from the center. This didn’t feel right. I rejected this solution. 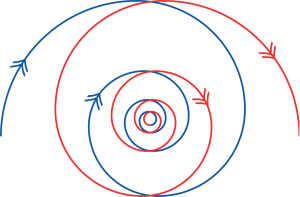 My next approach was to make a U-turn in the center and then start spiraling outwards again, without crossing any lines. But this didn’t ‘feel’ right eiter. Energy should move on, not slowed down. 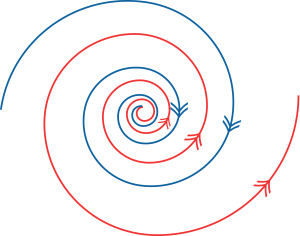 Then I realised that inversion of rotational direction the way I felt as the right way, can only be done by going 3-D. Until now I had thought as a flatlander: 2-dimensional only. While thinking 3-D I discovered this solution…

The orbit of the energy line depicted here is what later would be called the Akaija-inversion. Energy going anti-clockwise (red line) to the centre, inverses in that centre, and will then go the in clockwise direction outwards. Inversion of Spin, or Spin-Inversion is the proper expression.

Realise this: even a thought can do the trick. This ‘thought’ can be a ‘choice’, and from that moment on your life will never be the same. Every action you do sets things into motion.
Do you always go against the flow?
You have a choice here, because you can decide to go with the flow.

That’s what the Aurahealer, and the Akaija, is about: presenting you with the fact that you always have freedom of choice. Though life may present you a one-way street in one direction only, you still have a choice to accept this road or not. Fighting this inevitable road by saying ‘no’ may result in much hardship, even pain. Accepting it as your road can result in much easier going through life. From that new way of living you will be able to use your energy to look forward, and to discover that even that road will present you with interesting side roads (choices) you kept overlooking, because you were fighting the main road all the time.

Aura Healer is one of the first paintings Wim made after his love Linda had died in 2001, after  having fought against her illness for many months.

It is made of two separate parts: the inner painting and the outer ring, which can be rotated freely on the original object. What then happens is that the energy from this painting changes.

Jozef Rulof, a very famous Dutch psychic and author (and psychic painter) who died several years ago, once said: “Music and Art will be the healing methods of the future.”

Aura Healer is an example of this.

‘Aura Healer’ is available as a poster or as a canvas reproduction in various sizes on our webshop. Click Here.

Below you can see the original object Aura Healer, on a specially designed wooden standard. 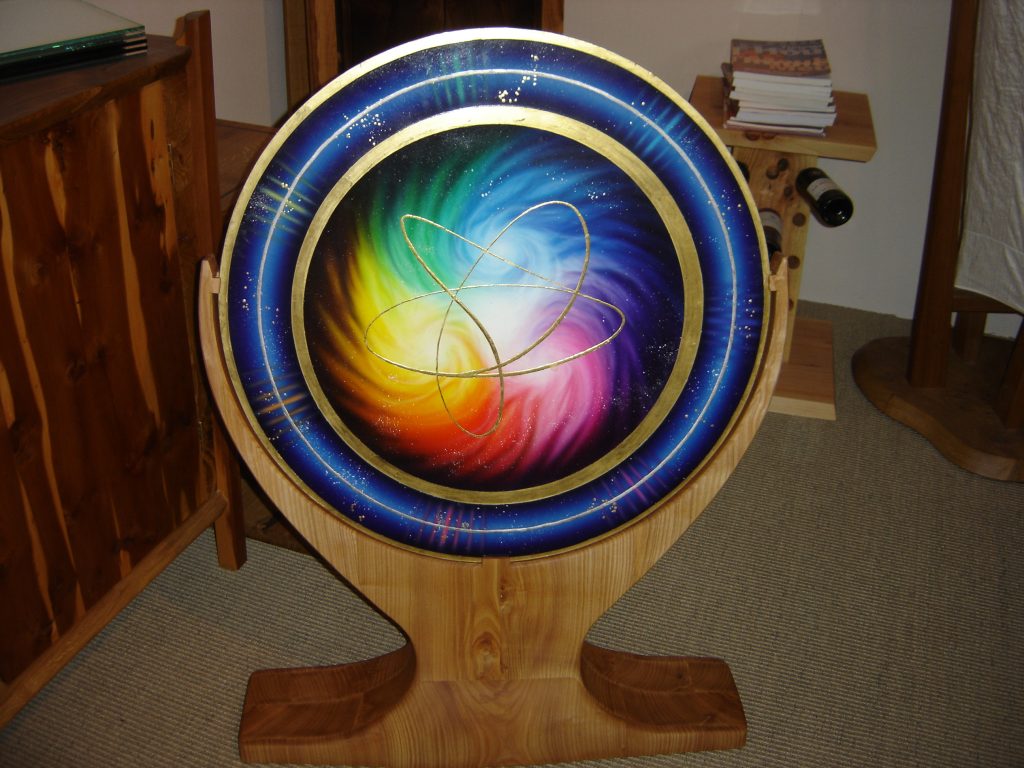